Reviews
Covid-19 Update
About Us
Things to do

Welcome to Chania, The second largest city in Crete and capital of Chania prefecture. Located 60 km from Rethymnon and 145 from Heraklion. It occupies an area of ​​approximately 11 square kilometers and according to the 2001 census has 55.838 inhabitants population. There was a significant Minoan city believed to ancient Cydonia since historically and based on archaeological research proves that is built on the ruins of. Ancient Cydonia was a remarkable ancient city, built in prehistoric times by Kydon, son – according to the ancient Cretans – Mercury – in other Apollo – and nymph Akakalidas, daughter of Minos. Mentioned by Homer as one of the most important cities of Crete, while Kydonians considered prehellenic sex. The ancient writers consider Cydonia ”

There are many theories regarding the etymology of the place name of the city. Probably a corruption of the name Chthonia, who was one of the ancient names of Crete, come to Chania. According to another version from the Arabic Hani or end of alchania Komi (suburb or district of Cydonia).

👉How to get to Zinovia in Chania by Bus?👈

The traditional diet of Crete

“On an international scale there is much discussion about, and deep interest in, finding the ideal diet which will improve the health of human beings warding off illnesses. Ever since antiquity, the traditional diet of Creteseems to be just such a one, including all the right ingredients.
A comparative study among several developed countries, which began in 1960 on behalf of seven countries, has a group of about 700 Cretan men from the countryside under medical observation, regularly checking the state of their health: so far this group has had the lowest percentage of deaths caused by heart attacks and different kinds of cancer.
This study has also shown the population of Crete to be the longest living one: when, in 1991, thirty one years after the beginning of the study, the Social Health Sector of the University of Crete undertook the medical checkup of the group, about 50% were found to be still alive as opposed to Finland where there wasn’t a single survivor!

….Until recently the Cretan diet was simple and wholesome: olive oil of course, which counted for the 1/3 of the individual’s daily need in energy, but mainly cereals, principally bread, pulses, vegetables and fruit and, to a lesser degree, cheese, milk, eggs, fish and a little red wine with every meal….

Taking the conditions of modern life into account, we would recommend a return to the traditional Cretan diet, but with a noticeable decrease in the amount and frequency in the consumption of meat and other animal products. On the other hand, cereals (mainly bread), pulses, vegetables and fruit should represent 85% of our daily food.

The consumption of olive oil must be continued: it has been proven through several past and present studies that this excellent oil plays an all-important role in warding off illnesses and in preserving our good health. Contrary to other vegetable oils, olive oil is rich in monounsaturated fatty acids which are resistant to oxidation and diminish the amount of LDL cholesterol while raising the HDL cholesterol. This last one is a protection against atherosclerosis,…”

* This article about the Cretan diet has been republished from the book of Maria and Nikos Psilakis: “Cretan Cooking”, KARMANOR editions, ISBN 960-7448-11-1. It is an excellent book with 260 traditional Crete recipes.

The Samaria Gorge is the longest trekking gorge in Europe and also the most famous of all. Thousands of tourists flock here daily in the summer season to walk from the top to the bottom. For many visitors, it?is the sole purpose of their visit to Crete. The length of the gorge, which belongs to the European E4 path, reaches 18km and takes almost 4-7 hours to hike from Omalos to Agia Roumeli, depending on trekking speed. 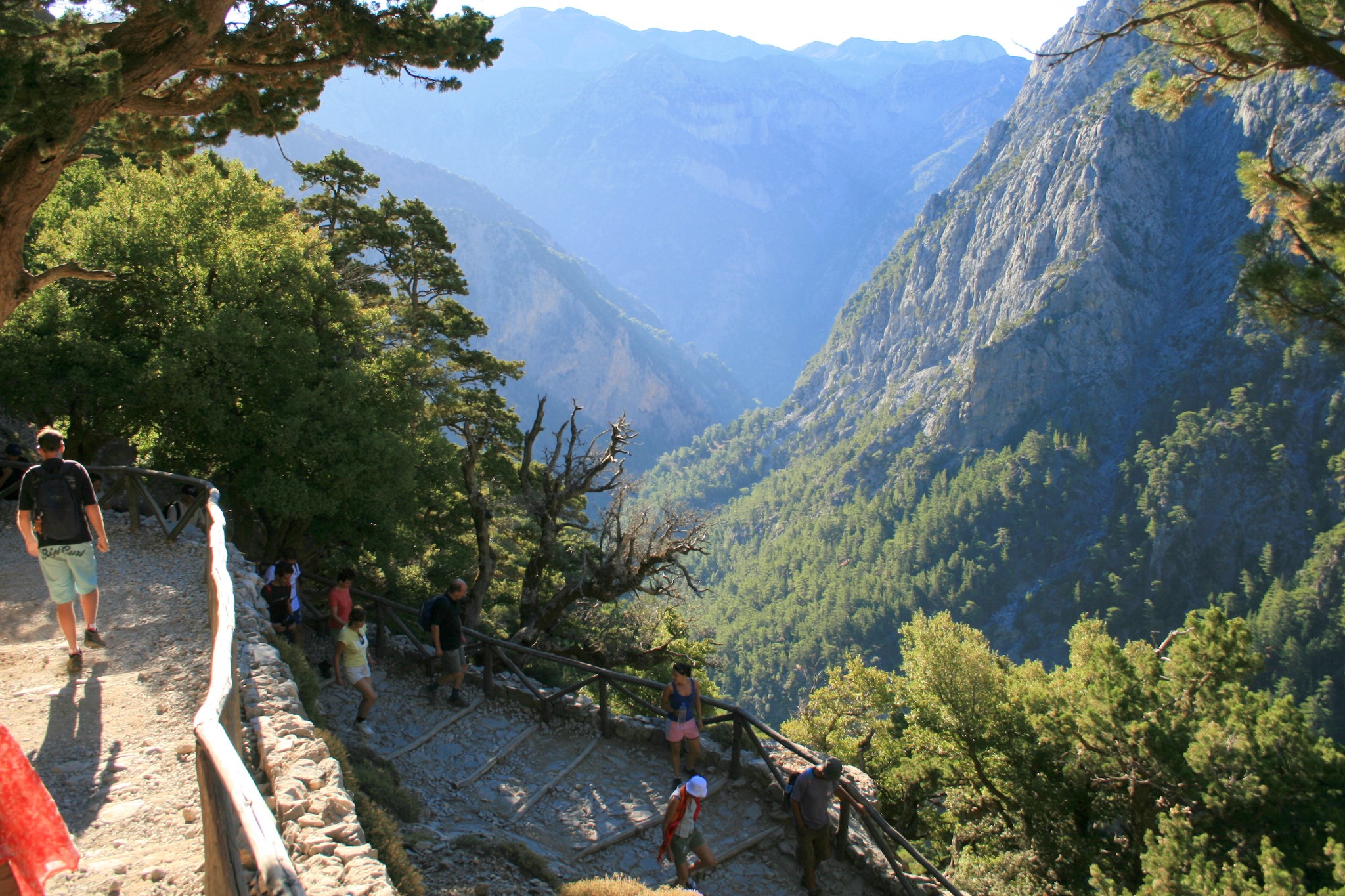